Imagine buying a 25-foot-tall tree in an 8-by-8-foot square box.

To Gideon “Deon” Dekkers Sr., founder of one of the largest commercial tree nurseries in Northeast Texas, it’s the only way to buy a large tree.

Dekkers and his sons, Andre and Deon Jr., own and operate Twin Lakes Nursery near Canton, where they specialize in growing large, mature trees for the commercial landscaping industry.

From 13-foot hollies to 30-foot oaks — some up to 25 years old — Twin Lakes provides contractors with towering trees that look like they’ve always been a part of the landscape. They’ve even sold trees to New York City’s Rockefeller Center.

But what sets Twin Lakes apart from other nurseries is the way the family grows its trees — in gigantic wooden boxes and large plastic containers.

“Our trees are container-grown — not field-grown and not balled and burlapped — because containers are healthier for them. It’s better for the root system, and the tree gets a better start when it’s installed,” Dekkers says. 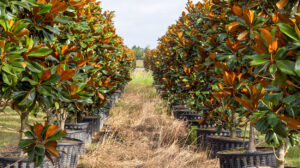 Container culture is a practice Dekkers was familiar with in his native South Africa. For over 15 years, he farmed and operated construction and landscaping businesses. Then in 1985, he emigrated to Texas, jobless but full of ambition.

“I had no idea how I’d support my family,” he says. “I didn’t even have a credit card.”

What he possessed, though, was a strong work ethic and good business instincts. Soon he was winning construction and landscaping contracts in the Houston and Dallas areas. That’s when he saw an opportunity to provide mature trees for commercial landscapers and landscape architects.

“There was nobody in Texas providing that kind of tree,” he says. That’s not all. “When I came here from South Africa and saw nurseries digging trees out of the ground, it just didn’t make sense to me.”

Dekkers and his wife, Lorraine, began searching for land where they literally could put down roots. Research and meetings with Texas A&M University arborists pointed them to East Texas.

One day in 1991, en route to look at a property, they noticed a man opening a gate along the highway.

“To this day, I can’t explain why, but I felt I had to stop and talk to him,” says Deon, calling it a “godly” inspiration. “It turned out the man had 55 acres for sale. That land was the start of this farm.”

Dekkers and his sons planted trees on the property, which he and Lorraine named AM&D Tree Farm — the initials of their three children. While the trees grew, construction and landscaping work paid the bills. But his first love was farming.

“I worked for nine years in construction and made a lot of money, but I didn’t enjoy it. It was a means to an end,” he says. As neighboring properties were offered for sale, Dekkers added them to the tree farm, self-financing each one. Then, in 2001, the family established Twin Lakes Golf Course, which became a top-rated course in the region.

The golf course complemented the nursery. Scenic man-made lakes, which capture the farm’s runoff, provided irrigation for fairways and are still the primary water source for the tree operation.

However, after a tornado tore through the Canton area in 2017, damaging parts of the course, the Dekkers family returned the golf course to agricultural operations the following year. Today, half of the 2,006-acre Twin Lakes property is in tree production. The other half is devoted to coastal Bermuda hay production and a commercial Brangus cattle herd.

While the area is prone to tornadoes and freezes, Twin Lakes minimizes its risk by spreading its 28 varieties of trees across the 2-mile-wide farm.

“We don’t put our eggs in one basket,” Dekkers says. “Our most expensive trees are on opposite sides of the farm.”

Twin Lakes contracts with other East Texas growers to start seedlings for them. At 2 to 3 years of age, the trees are brought to the Canton nursery, where they receive special care until they’re ready for sale to commercial customers across Texas and the southern U.S.

That special treatment starts with the right container — a large wooden box built by the nursery’s own staff, or a slotted plastic pot that’s vertically corrugated to guide the root tips to air-pruning slots. Both types of containers discourage root circling and encourage denser rooting than burlap wraps, Dekkers explains. Wooden boxes are cooler and offer better temperature control than plastic pots.

But the secret ingredient in their formula is their planting mix, according to Deon Jr. A heavier organic material than traditional mulch, it provides better moisture retention than porous bark mulch and is compatible with most soils.

Just as important is watering. Workers probe the root balls every day, and spot sprayers connected to the containers maintain ideal moisture levels.

It takes 80 employees to run the operation. Most are hired through the federal H-2A temporary agricultural worker program. Many of these employees return to Twin Lakes every year, where they live in houses that were on the parcels of land the Dekkers family purchased over the years.

“Some of our employees have been with us for 30 years,” says Dekkers. “We train them based on their individual skills, and they are excellent workers. We couldn’t operate this business without them.”

Also supporting the nursery is their lender, Texas Farm Credit, which they discovered when they were looking for an agricultural banker that understood the nursery business.

“We’ve never had such a simple banking experience as we have with Texas Farm Credit,” Dekkers says. “With commercial banks, we had to justify everything. Texas Farm Credit understands our growth and infrastructure needs.”

Good for the environment Not only that, but Farm Credit also recognizes the family’s role as stewards of the land, their loan officer points out. The operation uses the latest and most efficient irrigation practices, while also using the farm’s renewable resources for compost and dry earth potting matter, which is native topsoil mixed with aged pine bark.

“The Dekkers are responsible for adding hundreds of trees to our urban landscapes every year, which in turn are good for wildlife, soil and air,” says Dustin McClendon, with Texas Farm Credit. “They’ve contributed so much to the Canton community, and we’re pleased to support their goals.”

As for the future, it’s too early to know if any of Deon and Lorraine’s 10 grandchildren will want to get involved in the business. But for now, Dekkers says, the family’s goal is simply “to be the best large-tree supplier in the South.”

“It’s really unbelievable how blessed we are to have this place and this business,” he says. “We couldn’t have accomplished this anywhere but Texas.”

“There are so many people who don’t know how to water and how to install trees. Watering is the biggest education challenge,” he says. The challenge extends to drainage, too. If you’ve ever lived or driven through southern Texas, you know how rich and diverse the landscape can be. It’s full of all different types farming operations that are home to a large variety of crops. Ag Exemptions and Why They Are Important

One of the principals we feel really sets us apart from traditional mortgage lenders is that we allow agricultural exemptions to remain in place.